Visit our coronavirus page to stay up-to-date on the latest information and resources. ALL IN-PERSON CITY PROGRAMS AND EVENTS ARE CANCELLED UNTIL FURTHER NOTICE. See current closure details. 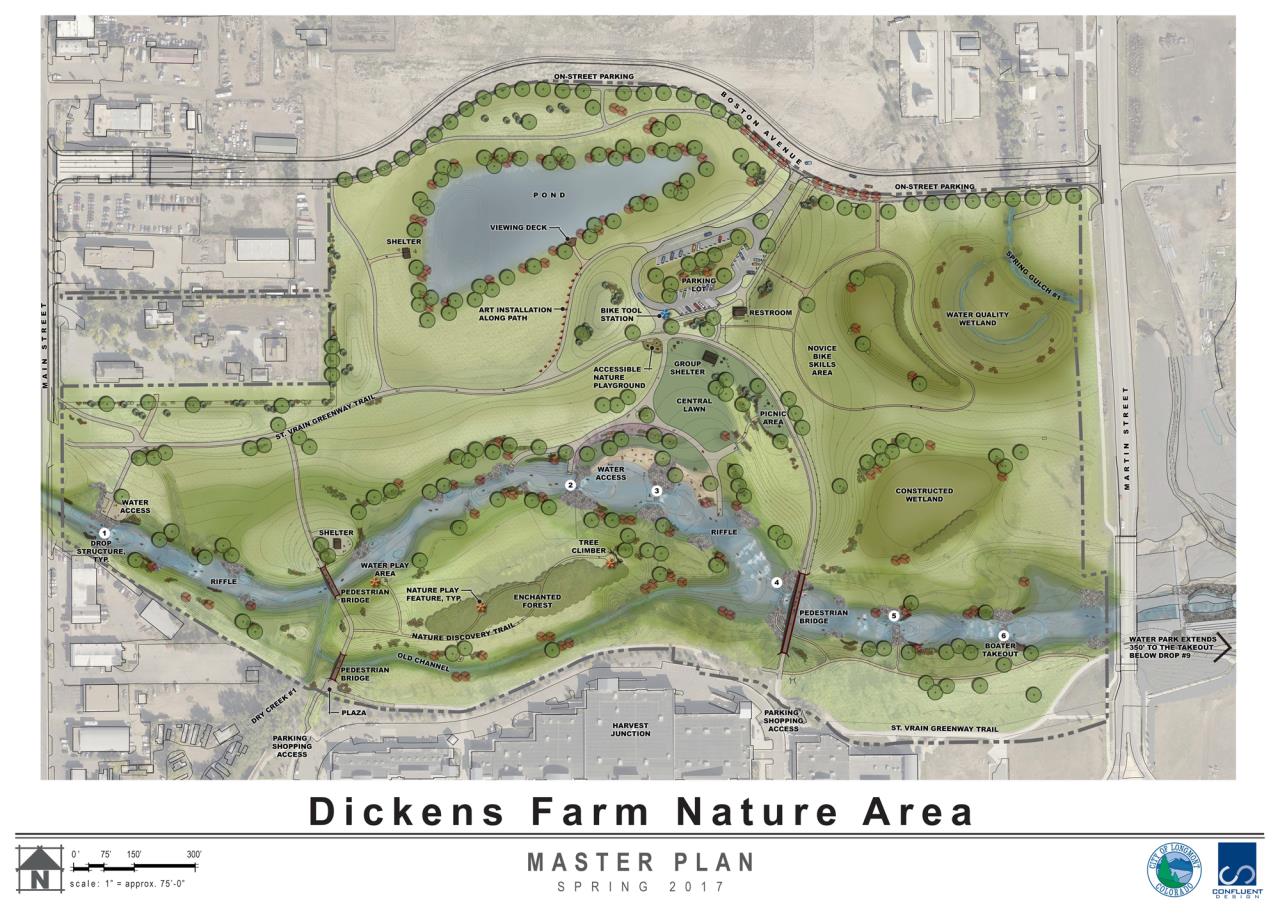 Residents and visitors to Longmont will have a new item on their must-do lists for fun starting in 2019. That’s when the Dickens Farm Nature Area is expected to be ready to enjoy.

Not sure what will be on the site? That’s understandable, since the Dickens master plan has evolved quite a bit through the years. Follow along as we bring you up to date on the five Ws of the Dickens Farm Nature Area.

First, some history: The 52-acre Dickens Farm property was Longmont’s first acquisition under the Open Space program. As part of the St. Vrain Greenway master plan update in 2001, the property was designated as a future district park (which we now call a nature area). Bike paths and benches were added, with plans to return to the area in 2012 to design and build out the amenities. Then came the 2013 flood. After some design updates, work is back on track.

WHAT IS IT: An interactive nature area where the St. Vrain Creek runs right through. Rock structures—called “drops”—running downstream from Main Street Bridge and under Martin Street Bridge will create a series of small falls and splash areas appealing to everyone from small children playing along the bank to tubers and kayakers.

A nature discovery area, anchored by an old Cottonwood trunk, will encourage hands-on exploration, including climbing and digging in the dirt. Young riders can practice their bike skills in a dirt track area, and the St. Vrain Greenway will once again route through the site, providing easy access to a piece of nature in the heart of the urban environment.

There will also be park shelters and plenty of passive recreation space for those who want to walk, picnic, or just relax.

WHEN: Creek work at Dickens was completed as part of construction on the first phase of the Resilient St. Vrain flood mitigation project. Construction is anticipated to start in May 2019 and continue throughout the summer to build a nature discovery area, bike skills area, picnic shelters, parking lot and restrooms. (Occasional, brief trail closures may be expected during the construction, but at least one trail route through the nature area is planned to remain open for users.)

WHERE: The nature area hugs the St. Vrain Creek from Main to Martin Streets and is bounded by the new Boston Avenue extension to the north. It will be easily accessible by bike from the St. Vrain Greenway and all its connections. A parking lot and on-street parking on Boston are also planned.

WHY: Access to nature has been proven important by many studies. From general well-being to specific physical and cognitive improvements, researchers are finding a multitude of benefits to a connection with the natural world. Dickens Farm Nature Area will give people the chance to interact with the natural environment along the St. Vrain Creek, as well as the creek itself.

WHO: You, of course! Longmont residents have been key factors in the minds of those designing (and redesigning) the nature area. And once it’s here, we hope you’ll be one of the happy faces enjoying your new space.

Senior Project Manager Steve Ransweiler talks about the history of the Dickens Farm Nature Area project and what visitors can expect when the project is completed in this 4-minute video clip.