This blog shares ways to help you make sure you're doing all you can to keep more out of the landfill and put those items to good use through recycling and composting. From checking out new items accepted for recycling to learning what's the best way to remove food residue before tossing that peanut butter jar, we'll share monthly tips and tricks to help you. Follow along as we help you become a waste wizard! 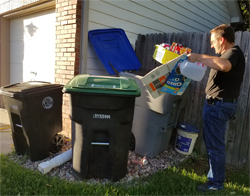 Tony Spensieri moved to Longmont with his wife, Sara, and their two sons in 2014. The family had previously lived in Milliken, where they practiced backyard composting with their large garden, but were no longer doing so after their move. After seeing an ad for curbside composting on a Waste Services collection truck, they decided to recommit to the effort. “We were watching for the early sign-up and did it as soon as we saw we could,” said Spensieri, who works as a substation apprentice for Longmont Power & Communications.

After curbside composting began, the Spensieri family began focusing on waste reduction in earnest. Originally, their household subscribed to the 96-gallon weekly trash cart, but after focusing more on composting and recycling, the family realized the 48-gallon cart could work for them. “We downsized our trash container to the smaller weekly one and began using a 3-gallon countertop bucket in the kitchen to compost,” he said. 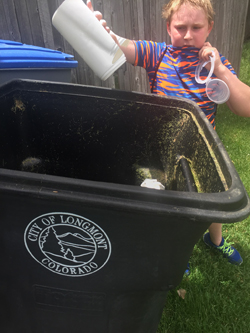 in the family is on board with reducing their waste, Spensieri said.

The family also recycles all that they can, he said. “We’re filling our recycling bin every time. If I get too much, I put it in the back of the car and go to the Waste Diversion Center.”

“I find it easy to recycle and compost. Each time we look, there’s something new we can do,” Spensieri said. He noted last year’s expansion in items accepted for recycling, including berry containers and plastic tub lids. 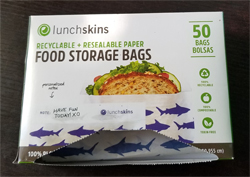 Besides recycling and composting, the Spensieri family has worked to change their usage and shopping habits. Family members carry reusable water bottles and have found lunch bags that are 100 percent recyclable and compostable. They also use reusable, washable bags when buying produce and use washable dishes whenever possible.

When they do need to use disposable items, “we purchase items like plates and cups in compostable form to cut down on our waste as much as possible,” he said. 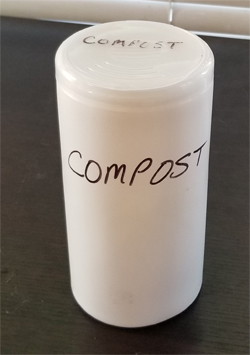 Spensieri recalled the Erie landfill where trash was dumped during his childhood. That part of the landfill is now full, he said, which he described as “essentially a 1,000-foot mountain of garbage.”

Keeping out items that can be recycled or composted is important to Spensieri. “It’s not about my generation, or even about my kids,” he said. “It’s about my kids’ kids.”