Thanks for your continued respect for the Resilient St. Vrain construction zones. We recognize that it may be frustrating to see what look like finished trails through these areas but be unable to use them yet. Current work remains on track for spring 2018 trail openings. We promise you’ll be among the first to know when these St. Vrain Greenway trail segments are ready for use!

Crews are currently rebuilding St. Vrain Greenway (SVG) trail segments destroyed by flooding in 2013 at Sandstone Ranch and between Left Hand Creek and Main Street (aka City Reach 1). We thought you might like to follow along as the trail is rebuilt through City Reach 1.

This trail rebuilding work is part of the Resilient St. Vrain project to protect people and property by making the St. Vrain Creek through Longmont more resilient to future flooding. Once structural and excavation work was completed to widen the creek’s channel and install rock drop structures, crews continued on to the trail building portion of the project. 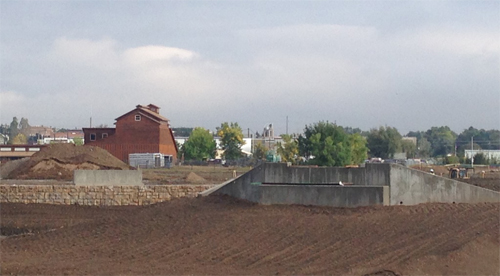 Retaining walls made of modular concrete blocks were also installed near one of the pedestrian bridges to smoothly transition from the higher level of the trails and bridges down to the level of the creek. The Fall issue of Resilient St. Vrain Roundup highlighted the building process for these retaining walls >

The area's three pedestrian bridges were installed by large cranes. Two cranes supported the longest bridge during its installation.

The next step is creating the paths. First, dirt is moved into place and prepared for concrete to be poured atop it (known as grading the trail).

Next up is proof rolling: within 24-48 hours before pouring concrete for a trail section, a heavy truck is driven over the graded trail while the City’s construction inspector checks for soft spots. If she finds any, crews have to fix the grading in that area to better support the concrete before they can proceed.

Because many bike paths feature curved routes or intersect with other paths, sections of concrete trails are often hand-poured. That was the case on this project as well.

To hand-pour a trail, crews set up wooden forms, add concrete from a mixer truck, and then smooth out the concrete and remove the excess. At the right point during the concrete curing process, crews finish the concrete (by applying a texture or pattern to ensure the surface is neither too smooth nor too rough).

After the concrete has cured enough to walk on, crews use a special saw to cut control joints into the trail. (A control joint is that line between sections of concrete. It helps control where concrete will crack as it ages and hardens.)

Finally, crews remove the forms. This process is repeated until all the sections have been poured.

The contractor for City Reach 1 took advantage of some long segments of trail without intersections to bring in a specialty machine known as a slipform paver. This machine eliminates the need for setting and resetting the wooden forms. Crew members follow behind smoothing and finishing the trail just as they would for the hand poured sections (only there are not any wood forms to remove). 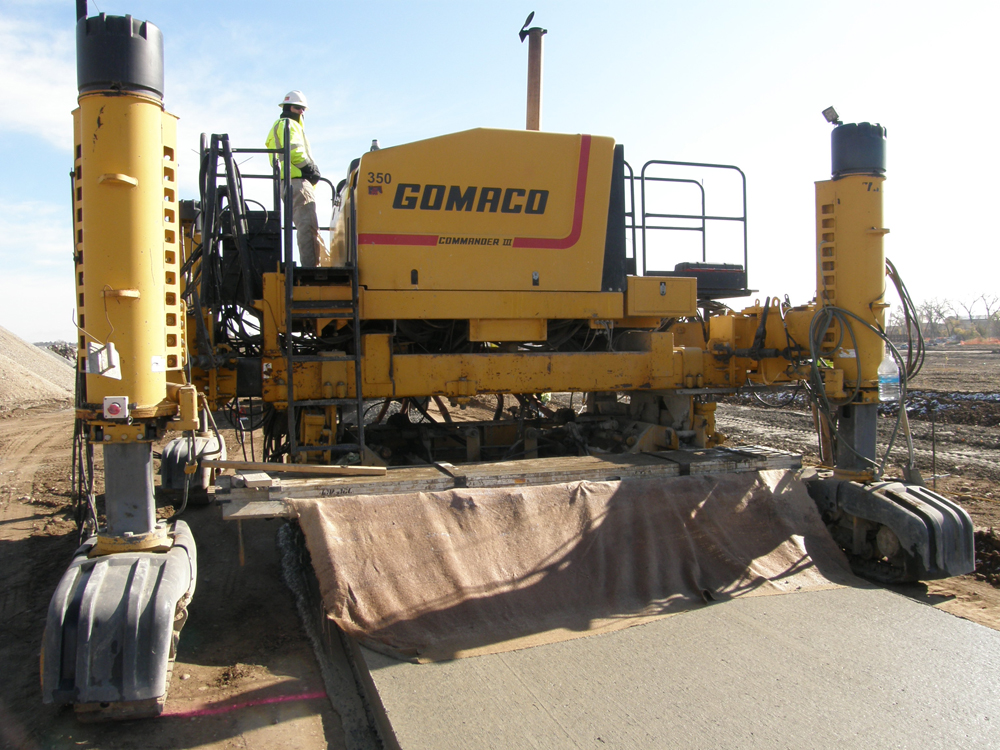 The entire City Reach 1 area will remain an active construction site into 2018. Remaining project tasks include pouring additional concrete; installing irrigation, benches, trash cans, fencing and signs; seeding and planting; and adding crushed stone paths alongside the trails. Because much of this work will take place on or near the concrete paths, the SVG trail must remain closed through this area until all work has been completed to maintain safety for both construction workers and trail users.

A spring 2018 opening is also planned for the SVG trail in this area.