Browse all of the city buildings, golf courses, parks, public art and rental spaces by selecting a Category or choose an Amenity.

Then click the facility title or the image which will take you to a detailed page of information.

Find where the facility or park is located by clicking on the address which will take you to a Google map where you can get directions.

Roosevelt Park, presumably named for President Theodore Roosevelt after his visit to Longmont in 1900, is one of the original parks planned by the Chicago-Colorado Colony. Covering three city blocks, the land was purchased in 1871 by J.M. Mumford for $2.48 at a tax sale and donated to the City in 1892. At first, the park was called Lake Park, then Longmont Driving Park, and featured a lake used for ice skating, a half-mile race track, and racing barns. The Roosevelt Park Auditorium, built in 1915, was used for the popular Jitney dances in the 30's, exhibits, the Boulder County Fair, and for other events. The auditorium was the City's largest meeting place for decades. In 1921, the great singer Madam Schumann Heink gave a concert there.

In 1945, the Longmont Lions Club began planting the rose garden on the east side of the park as a war memorial. It was moved to the west side of the park in 1951, when the St. Vrain Memorial Center was built, which included an auditorium with a stage and a gymnasium. 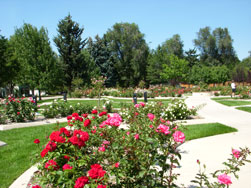 The Senior Center was built in 1976, and in 1996 a life-size bronze sculpture by local artist Joe Kinkel, "Heart-to-Hand," commissioned by the Art in Public Places Committee, was placed near the Senior Center. Also found throughout the park is a fanciful series of sculptural objects titled "Manilda G. Raffe" by Michele VandenHeuvel, dedicated in 2001.

In 1998 Norris Dullea, a Denver-based landscape architectural firm, led a master plan effort to update this oldest of Longmont's community parks. A successful public process helped shape a vision for the renovated park. The Roosevelt Activity & Wading Pool, built in 1998, is at the northwest corner of the park. The 1999 citizen-approved bond issue provided funds for an improvement project that was completed in 2002. 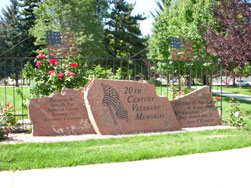 Veterans Memorial Work included expansions to the Senior Center, St. Vrain Memorial Building, and the rose garden. The ball fields were removed and a multi-use pavilion was added for concerts and large events. During the winter, an ice skating rink is operated under the pavilion for family winter fun.

The pavilion can be rented for private use for a fee. A stone shelter is also available for reservation from May through the end of September. To view a complete list of park amenities and associated trail distances, visit our Plans, Maps & Reports webpage and view the Park Amenities Chart.

For more information or to reserve a shelter at this park, contact Parks, Open Space & Trails.