Effective immediately, the St. Vrain Greenway trail between Main Street and Boston Avenue and the Price Road pedestrian bridge over the St. Vrain Creek near the BNSF Railroad Bridge are closed to all users for public safety during construction on the Resilient St. Vrain project (RSVP) in this area. The trail closure from South Pratt Parkway to Boston Avenue will last approximately 24 months, while a portion between Main Street and South Pratt Parkway is anticipated to reopen later in 2019.

Signs announcing the detour and showing the detour route are posted at Main Street and on Boston Avenue. A 1.5-mile, on-street detour is marked by orange signs that route trail users around the work zone. View a map of the detour below or at bit.ly/stvrain-trail-detour.

The greenway trail closure, previously announced in a mid-July City news release, is to allow for work on City Reach 2B and a future phase of Resilient St. Vrain, the City of Longmont’s project to fully restore the St. Vrain Greenway and improve the St. Vrain Creek channel to protect people, property and infrastructure from future flooding.

Work in City Reach 2B reach will improve the St. Vrain Creek by relocating the creek channel, adding retaining wall sections, replacing the existing Price Road pedestrian bridge with a longer bridge that will span the new creek channel, and planting native vegetation to enhance wildlife habitat through the area.

As part of City Reach 2B construction, the City of Longmont also will replace the existing BSNF Railroad Bridge near Price Road with a wider, longer bridge that is capable of passing water up to the 100-year flood flow levels. During the September 2013 flood, the existing railroad bridge was a pinch point that contributed to major flooding in Longmont’s commercial, industrial and residential areas along the St. Vrain Creek.

For access to the Longmont Bike Map and for information on open, partially closed, and closed trails, visit bit.ly/bicycling-longmont or call 303-651-8416. 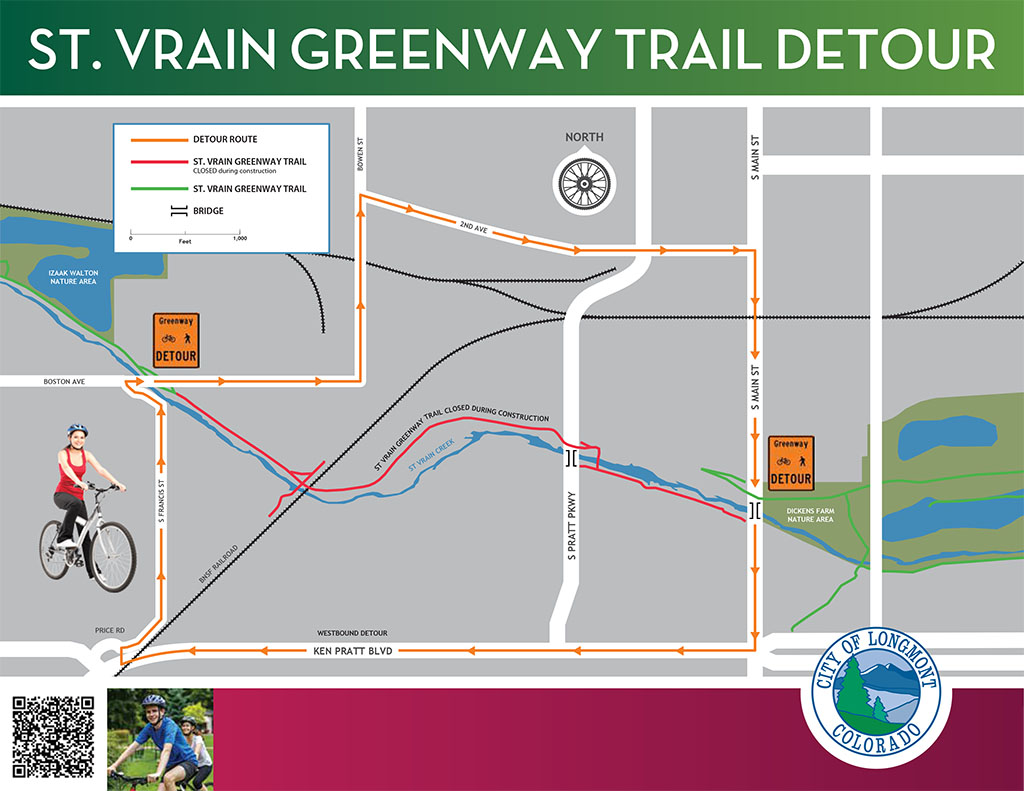