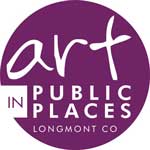 Drive through town, run along the trails, enjoy a round of golf. Wherever you go in Longmont, you will find art. Established in 1987, Longmont’s Art in Public Places Program is funded through a one percent levy on most capital improvement projects more than $50,000. It is administered through the Longmont Museum and managed by the Art in Public Places Commission of the City of Longmont.

Public art weaves a diverse and colorful tapestry throughout world communities. It is thought provoking, challenging and often controversial. For centuries powerful citizens and patrons of the arts have commissioned works, such as the Sphinx of Giza, Michelangelo’s David, the Statue of Liberty and the Vietnam Memorial, all of which have become cherished symbols of pride and identity.

With the inception of the National Endowment for the Arts in 1965, the modern public art program was born in the United States. The first matching grant for a public work of art was given to the City of Grand Rapids, Michigan, in 1967. The monumental abstract sculpture, entitled La Grande Vitesse, initially stirred both praise and criticism. Over time it became a symbol for the City of Grand Rapids, and its image now adorns City sanitation trucks and the mayor’s stationery. The Grand Rapids model set the stage for public art policy. Since then, public art programs have emerged and evolved in urban cities and small towns. These programs continue to enrich and invigorate the cultural life of communities across the United States.

The Fabric of Public Art

Public art can be fashioned of bronze, brick, steel, or fabric; it can be a mural, sculpture, park bench, banner, or imprint; it can be colorful or subdued, interior or exterior, monumental or diminutive, utilitarian or decorative. It is through a commitment to diversity in material, form and placement that Longmont’s Art in Public Places has become one of Colorado’s most successful public art programs.