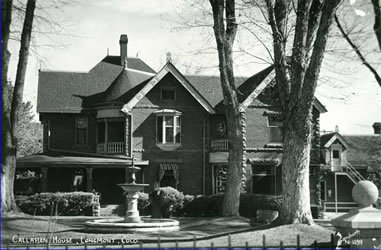 T.M. Callahan was born 1857 in Chillicothe, Illinois. He was trained as a teacher and an itinerant photographer who loved to travel. He fell in love with and married Alice Barnett, a banker's daughter, in Humansville, Missouri in 1886.

Together they moved west to Longmont in 1889 where they opened a small dry goods store on Main Street called "The Golden Rule."

Their only child, Raymond, was born in Longmont in 1894.

his business prospered he expanded into general merchandise, with Alice by his side and often in the lead making tasteful and stylish product choices. T.M. Callahan opened multiple "The Golden Rule" stores throughout the Rocky Mountain and Pacific Coast states where his well-trained Longmont clerks became managers. J.C. Penney took a job with Callahan from 1899 to 1907 after Penney’s butcher shop failed. In partnership they opened a store in Kemmerer, Wyo., which would later become one of Penney’s chain stores. The first store under the J.C. Penney name was in Longmont, Colo.

The Callahan House was built in 1892 by James Wiggins for J.K. Sweeny. The two-story red brick structure, detailed with Lyons sandstone corners and sills, had four rooms on each floor and a full basement.

T.M. Callahan purchased the house in 1896. As part of the purchase price, Callahan, an investor in a lumber mill, shipped 17 train carloads of white pine lumber from Birch Tree, Mo., to Pueblo, Colo. Sweeny used the material in the construction of a flour mill. 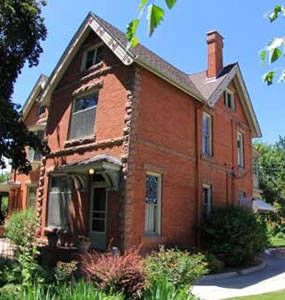 After buying the home from Sweeny, a number of modernizations were made by contractors E.G. Cauble and Frank Wiggins, including a hot water system, central heating system, electricity and indoor plumbing, along with new paint or wallpaper throughout the house.

In the summer of 1904 workmen began work on the wraparound veranda along the west and south sides of the house. The special concrete work gave the porch a very distinctive Victorian appearance. In some of the earlier photographs, sun shade awnings were located at every window.

In 1906 another phase of rehabilitation began with a two-story addition to the east side of the house, which doubled the size of the home.


The bathrooms and kitchen were tiled with ornate and patterned tiles in the floor and on the walls. The original kitchen became the formal dining room and a new kitchen with butler's pantry was part of the addition.

In the southeast corner of the first floor was an office for T.M. Callahan with a private outside door for his business associates to enter.

The final phase of the transformation was carried out by interior designers from Chicago including ceiling plaster, floral and fruit wall paintings, ornate carved woodwork and parquet inlaid designs in the floors and hallways. 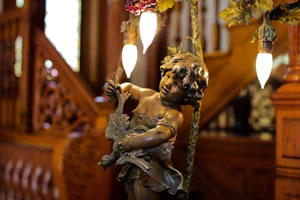 There is exquisite woodwork throughout the house with white mahogany in the parlor, golden oak in the music room, Antwerp oak in the dining room and San Domingo mahogany in Mr. Callahan's office. The dining room table and side boards were made especially for his office.

On the newel post of the elegant stairway of black walnut and cherry is an original bronze by August Moreau, with an inscription in French (which translates) "This age knows no pity." 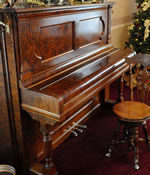 piano is an 1893 Steinway of American Walnut, a Christmas present to Alice from T.M. in 1896. In 2002 the piano was fully restored to its original quality with a grant from the Longs Peak Questers.

The formal parlor walls and ceiling are hand painted with Louis XIV style floral designs in their original colors.

There are beautiful beveled and leaded glass windows up and downstairs and two interior archways from the parlor. The stairwell has a stained glass window inset.

In 1906, Alice Callahan purchased the lot to the south from the widow of Dr. Jones and had the small house removed to create a formal Italianate garden. 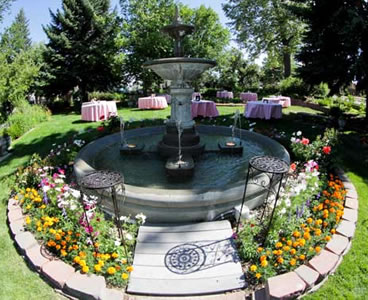 The garden plan was designed by a Chicago firm and a Boulder landscape gardener implemented the plan.

The garden features an electric lighted fountain with Pan featured in the masonry.

The four statues are of Baccus and Artemis. The garden lot and home are surrounded by wrought iron fencing with three gates.

Alice also purchased a 30 foot strip of land from the Flanders lot to the north of the house. It was, at that time, the largest private yard in the city limits.

Through the years the city has been granted historical funds for fountain and ironwork restoration. Today the Callahan House garden is the only city garden in Longmont with a fountain. The grounds are still maintained by the City of Longmont's Parks Department. 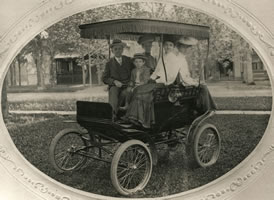 In April of 1902 the Callahans purchased the first automobile in Longmont, the first of many Callahan autos. 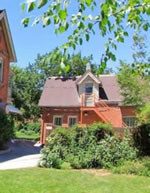 In December of the same year the Callahans built an "automobile house." Built into the garage floor was a turntable. This allowed the driver to leave the building without putting the car in reverse.


Since T.M. Callahan did not drive, his chauffeur was provided a second floor apartment in the "automobile house".

In 1938, the Callahan’s moved to Nevada to be near their son. They gifted their house and garden to the City of Longmont. Their wish was that it be used by the women of Longmont as a meeting place and social center.