The Focus on Longmont Community Summit was held on Saturday, April 16 th at the Radisson Conference Center . The

intended outcome of the Summit was to uncover the community’s shared preferences for Longmont ’s future and to begin forming community priorities for the roles and responsibilities of the City. Nearly 200 community members and City officials worked together throughout the day to make meaning of all the data collected from individual interviews, community conversations, and best in class research that were conducted from January – April, and to develop compelling future visions for Longmont and its city government. Summit attendees validated Longmont ’s “positive core” and discussed the “root causes” of our success—those people, systems, structure, places, funding, etc. that have contributed to Longmont ’s positive core. These are the factors that have enabled Longmont to be the great place that it is. They are the conditions that we must replicate in the future, if we are to consistently reproduce our successes.

What we learned about Longmont’s Positive Core

When Katrina first moved here, she didn't know anything about Longmont. Many of her friends had been really negative about her move, saying she wouldn't be safe; so when she was asked where she lived, she'd say Boulder rather than Longmont.

Shortly after her move there was a big parade near her home. She couldn't park her car near her apartment, because traffic, and parking, had both been rerouted. She was feeling really grumpy about it, when suddenly she heard all this noise, and saw bands and people in the distance.

She went downstairs and sat on her porch, waving to people who waved back at her as they went by. Everyone was so friendly. She felt warm and welcomed, and suddenly blessed to be in Longmont.

Quality natural environment – Natural spaces are important and the city has an eco-friendly attitude.

The City sponsored an Arbor Day celebration that was really special. They had equipment there, trees, trucks, and activities for children such as tree climbing and rides on equipment. City workers helped give kids experiences that were exciting but safe. City reps were friendly, open and knowledgeable.

The celebration was free and open to the public. Lots of people showed up and had a great time – but perhaps more important, people got a new perspective on what it means to be a community “caretaker.” They learned how they could care for their own yards in ways that would make the community better.

Celebrating together – Longmont provides a friendly environment for folks from all walks of life.

Dina truly felt a part of the community when her son’s Cub Scout pack had the opportunity to participate in Longmont’s Parade of Lights this past December (2004).

They created their own float and felt so special riding down the middle of Main Street waving to all the other “Longmonters.” It was a great occasion that brought the whole community together.

I will always carry that image of his huge smile with the giant Lego (the float’s theme) plopped on his head. I have to admit I felt a little “royal” walking alongside the float and waving to “the people.”

Opportunity for all – The community values education and there are different job opportunities. People care about seeing others succeed.

My wife got a letter from the grade school principal, asking for her input. The school was interested in understanding how to make things more inviting for the Latino population. As a result of the input they received, the staff decided to change the vacation schedule to accommodate the Latino students. They also added bilingual teachers and a food share program.

An engaged community – Longmont supports a culture of “giving back” and there is room for everyone to make a difference. The community is committed to breaking new ground in reaching across cultural divides and values global relations.

A while back, the Children’s Chorale wanted to send 30 kids to perform at Carnegie Hall. This was a great opportunity – one that really broadened the kids’ experience – but it cost of lot of money. Various Longmont businesses contributed items that were subsequently sold for fundraising purposes. The money was raised, and the chorale had a fabulous trip to New York!

Facilitative city leadership – City government has adopted an entrepreneurial style with employees who are personal and responsive. The City also helps support and facilitates community action.

The city had a grant program that enabled them to rent dumpsters at a good price. Our neighborhood rented a dumpster and had a neighborhood clean-up day.

Another important Summit accomplishment was defining the community’s future vision. This future is built upon what is good about the community already, and it illustrates the positive attributes of the community that residents want to see the more of. Based upon the mapping of the future developed at the Summit , Longmont ’s key themes are: 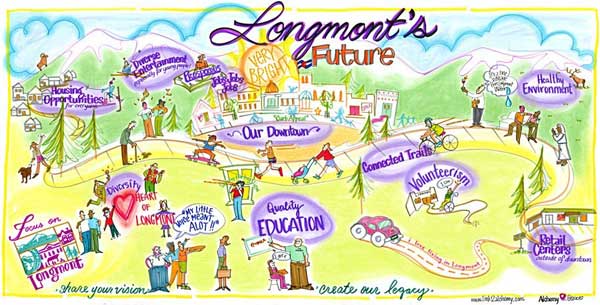