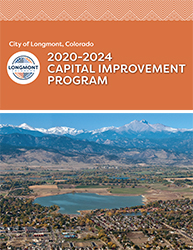 OVERVIEW OF THE CIP PROCESS

Since 1988, the city council and City staff have completed a five-year Capital Improvement Program (CIP) as the first step in developing the annual Operating Budget, in accordance with the City's financial policies.

Longmont's Capital Improvement Program is a planning document comprising the City's capital infrastructure needs for a five-year period. The document presents project proposals for construction of various capital projects around the City. A capital project is defined as a new, replacement of, or improvements to infrastructure (buildings, roads, parks, water and sewer lines, etc.) that has a minimum life expectancy of five years and a minimum cost of $10,000.

The process of developing a CIP separate from, but tied into, the Operating Budget is advantageous for numerous reasons, including:

The CIP process includes consideration of how projects will affect the City's Operating Budget after the project is completed. For example, if a new park is built, funds must be added to the Operating Budget to maintain the park.

There are several reasons why a five-year outlook is important. Many of these projects have long-term implications; they will have impacts on the Operating Budget or they are connected to other projects planned in the City. Citizens and the city council usually will find it useful to discuss and consider projects and their operational and funding impacts in the context of more than one year. A five-year outlook also gives the public and the council an idea of what infrastructure needs may be in the near future. If council and staff anticipate that certain expensive projects will be necessary in the next four to five years, they can begin planning and budgeting for them now, rather than being caught by surprise when the project is desperately needed and time is limited to consider other possible options.

Who develops the CIP?

The annual process of developing and implementing a capital improvement program is quite extensive and involves the participation of many people. Their diligence and cooperation is crucial to this document's success and quality.

The City's departments update the Capital Assets Maintenance Plan (CAMP) and any strategic plans, identify the projects to be considered in the CIP, complete the forms describing the projects and detailing the costs, coordinate with each other on projects that involve more than one department or division, and coordinate with other agencies if applicable.

The CIP Committee is a group of department representatives that oversee the CIP process. The committee administers and conducts the review and selection process through which projects are selected for funding. The committee develops a proposed CIP that is fiscally sound and meets the City's adopted goals and policies.

Coordination of the CIP Process

The Budget Office coordinates the annual CIP process. Duties include assisting City staff in completing CIP forms, preparing the initial rankings for all projects, updating fund statements for each funding source, providing information to the public, assembling and distributing all documents and materials, monitoring project expenses, and preparing any amendments and additional appropriation ordinances.

Outside Agencies and Neighborhood Groups

Numerous organizations outside of City government are affected by the City's capital construction. City staff work with those agencies and groups to get their input on proposed projects, provide information and, to the extent possible, coordinate projects with agencies that build or upgrade their own capital projects.

The city council reviews, holds public hearings, discusses, makes any changes and adopts the CIP as part of the Operating Budget process each year.

The CIP is first and foremost a planning tool to identify the City's capital needs and priorities. It is subject to change; none of it is carved in stone or unalterable. As the CIP is developed and after it has been adopted by the city council, there are procedures to amend the CIP so that it reflects the City's current priorities. The document is meant to help residents and the city council focus on the general direction in which the City is developing and to plan accordingly. It also shows what needs remain and allows the community to begin making long-term plans to meet those needs.