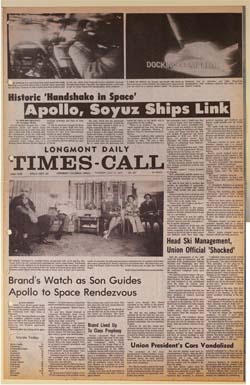 The Longmont Museum hosts a series of events commemorating the rich history of Longmont and the St. Vrain Valley each year. Longmont Week is typically celebrated the first week of February.

While Longmont has never had an official founding day, on February 1, 1871, Peter Kelley, Seth Terry, and William N. Byers officially signed the Certificate of Organization for the Chicago Colorado Colony, predecessor to the town of Longmont. These three individuals had been traveling the state, looking for a place to start a new community, and had decided upon an area in northern Boulder County, near the town of Burlington.

While Colorado was in its infancy in 1871, newspapers were already thriving. William N. Byers, one of the signers of the incorporation papers, had founded the Rocky Mountain News back in 1859. Even in tiny Burlington, work was underway to create a newspaper, the Burlington Free Press, whose first issue would come out April 26, 1871, as the town of Burlington was moving both its residents and even its buildings up to the new Longmont townsite.

With the transfer of the Longmont Times-Call collection to the Longmont Museum’s archives, the logical focus for Longmont Week 2015 was newspapers and their role in Longmont’s history. We celebrated the ways that journalism has reported news and shaped our community.

In 2017, we explored Longmont's transportation history -- a compliment to our Lowriders exhibition -- through hosting two lectures with Curator Erik Mason.

In 2018, we hosted a variety of historic lectures about how World War I affected Longmont, through personal stories about the soldiers, doctors, and nurses who served as well as citizens on the homefront. This was in conjunction with our WWI exhibit.

In 2019, we hosted Watershed Ranger Jamie Freel who taught about one of Longmont's most important environmental resources: water. Jamie talked about what it takes to manage the water, forests, and recreation at Button Rock Preserve. He also shared stories and photos from the flood of 2013.