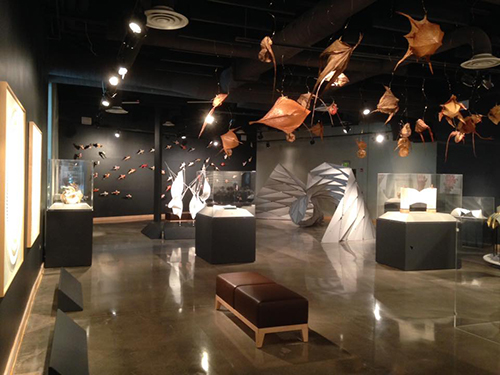 Exhibition admission: $8 adults, $5 students/seniors (62+), free for ages 3 and under. The second Saturday of each month is a free day.

Above the Fold demonstrates the extraordinary power and potential of contemporary origami. In the hands of nine international artists, what was once considered a children’s craft becomes a sophisticated global art form. Paper is transformed into breathtaking sculpture, large-scale installations and conceptual works that express contemporary social, political, and aesthetic ideas. Above the Fold is the first traveling exhibition to bring origami installations from around the world to North American audiences.

Each artist will create pieces specifically for this tour—their collective works have never been seen before anywhere in the world. These nine internationally celebrated folders comprise a cross-section of contemporary origami artists, ranging in age from 29 to 71, hailing from four different continents, and working in six different countries. Their origami creations will present original, “above the fold” commentaries on diverse aspects of modern life and art.

The exhibition celebrates these artists who are redefining a traditional Japanese craft as a modern global genre, inventing unexpected forms of artistic expression. Above the Fold was developed by International Arts & Artists and independent curator, author, and educator Meher McArthur.