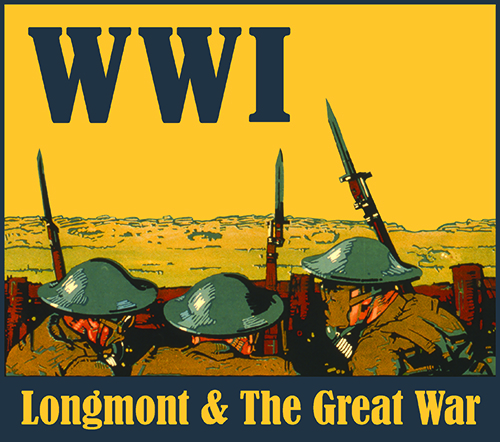 As the United States commemorates the centennial anniversary of the American military entering World War I, the Longmont Museum unveils a new exhibition illustrating Longmont’s role in the Great War. WWI: Longmont & the Great War tells the personal stories of World War I through the experiences of people from Longmont – soldiers, doctors, and nurses in training and overseas, as well as citizens on the homefront.

Items from the Museum’s collections make up the bulk of the exhibition, including full infantry uniforms, artifacts relating to medical care during the War, an airplane propeller, propaganda posters, photographs, letters and diaries, and many other personal objects. The exhibition also features a 2/3 scale bi-plane—a locally-made Curtiss JN-4 “Jenny” replica of the planes used by U.S. Army pilots in training during the War.

Become immersed in this story of Longmont’s history – a collective sacrifice that affected every member of our community 100 years ago.

The Mont Alto Orchestra, a five-piece chamber ensemble, will perform the musical score for the film. Mont Alto was formed in Colorado in 1989, and has scored more than 125 silent films using historic orchestrations.

Longmont in the Great War
February 22, 6:30 pm, $5
One hundred years ago, men and women left their homes in Longmont to serve in World War I. In this presentation, Heather Thorwald, a curator of the exhibit, shares dramatic stories of ordinary people whose lives were changed by this extraordinary event.

Deadly Laboratories – The Evolution of Tactics & Technology in the First World War
April 5, 6:30 pm, $5
Do you think of trench warfare as the insane tactic of old, mustachioed generals who didn’t care about the lives of their soldiers? Go beyond pop culture characterization to get a firsthand look at the small arms of the First World War and connect with the hardships and experiences of the soldiers who carried them with this presentation by local history buff, Benjamin White-Patarino.

Nick Forster: My grandfather’s WWI memoirs
Monday, April 30, 6:30 pm, $5
As our current exhibit, WWI: Longmont & the Great War, comes to a close, we’re adding a special surprise historic lecture! Host and co-founder of Boulder’s e-town, Nick Forster, will share the WWI memoirs of his grandfather, Henry Forster. Henry was born in 1889 and died in 1989, living through an amazing century of American history, including service in the Lafayette Flying Corps and U.S. Naval Air Service during the War. Through Henry’s journals, letters from the warfront, and videotaped interviews, Nick will bring the amazing stories of WWI aviators to life.

As a complement to our exhibition, enjoy a series of films that illustrate life during this era Thursday nights March 1 - 22.