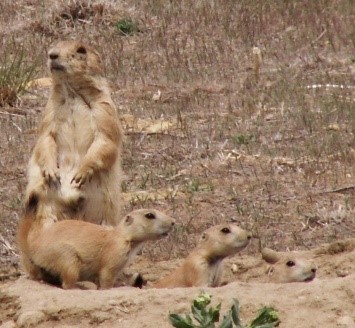 Prairie dog colonies were once found across the Great Plains. Their diets consist of a variety of vegetation, such as grasses, forbs, seeds, roots, and sedges. Within their natural habitat, Prairie dogs are considered a “Keystone” species because their colonies provide habitat to many other grassland wildlife. Due to changes in land use, only 1-2% of all historic Prairie dog habitat still exists. In order for this species to co-exist along Colorado’s Front Range the City of Longmont has developed regulations for the management and control of prairie dogs within the City limits.

The City of Longmont manages prairie dogs on a wide variety of properties that are owned or managed by the City. Depending on the management objective, the City categorizes each property into one of the following management types and follows all required City regulations.

Avoid projects that would impact the colony, to the degree practicable. Allow the colony to continue to function as at present. If the colony dies out due to sylvatic plague, leave the burrows intact to allow for future natural colonization. Alternatively, use the empty burrows following a sylvatic plague die-off (after a waiting period of at least 1 year) as a release site for prairie dogs that must be removed from other City lands or from lands being developed by private parties. In the intervening period, control weeds that may invade (e.g., by mowing or spraying with a chemical herbicide) and, where desirable vegetation is sparse, seed with an aggressive perennial grass to provide a temporary cover and improve conditions prior to recolonization or release of prairie dogs.

Same as Preserve, except that (a) barriers may be used to minimize offsite dispersal, (b) perch sites (poles) may be installed to attract raptors, and (c) hides (blinds) may be installed to aid hunting by carnivores. If the colony dies out due to sylvatic plague, retain the empty burrows for future natural recolonization or use them (after a wait of at least 1 year) for relocation of prairie dogs from other City lands or from lands being developed by private parties. Some intervening weed control or grass seeding may be required.

Same as Actively Manage/Replace, except that if the colony dies out due to sylvatic plague, destroy the burrows by discing or chiseling (“plowing”) and revegetate with perennial grasses (native or non-native, depending on the intended future use. If other prairie dog colonies exist nearby, the revegetated area may need to be protected by a barrier (vinylfence or other) to help prevent unwanted recolonization. This category would apply to colonies in areas considered inappropriate for prairie dogs or where their presence conflicts with a higher priority use, but where the situation does not need short-term action.

Applies to colonies in areas not considered appropriate for prairie dogs or where their presence conflicts with a higher priority use, and for which the need to remove the prairie dogs is more immediate than for Actively Manage/Remove. Types of removal are listed below.