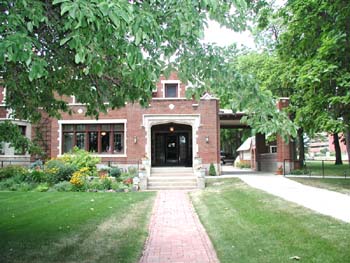 Charles Lewis Hover, born in 1867 in Wisconsin, studied pharmacy at the University of Wisconsin and then joined his brother in the wholesale drug business in Denver where he met and married Katherine Avery in 1898. In 1902, Charles purchased a 160-acre parcel of land on a dusty country lane west of Longmont and retired to the quiet life of a gentleman farmer.

Katherine Hover was a fine pianist, having studied under Henry Housely, who was organist at the St. Johns Episcopal Cathedral and an outstanding teacher of the area. She also learned clock making and repair from her father who was a jeweler and owned a jewelry store in Denver. After marrying Charles and moving to Longmont, Katherine became active in the life of her church and in musical activities of the community. Dinners were arranged to discuss some of the projects of special interest to Charles. The family was honored to entertain Secretary of Agriculture Jardine and other dignitaries at Hoverhome.

In 1907, the Hovers adopted Beatrice. She was nine years old at the time of her adoption. Beatrice attended the prestigious Wolcott School in Denver and was a Girl Scout leader. Beatrice also took a correspondence course in transcribing Braille and used her new talents for the benefit of many sightless people. She engaged in many church activities and always gave supportive companionship and steadfast love to her devoted parents.

Beatrice was happy to be apart of her mother's dream of creating a retirement community where people of advanced age could live with dignity in an interesting and comfortable atmosphere. Hover Manor made that dream a reality.

Hoverhome and the Hover Farm have since been purchased by the St. Vrain Historical Society and is used as an event center and hosts a variety of functions from wedding ceremonies to corporate events.