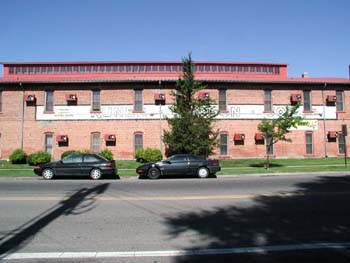 The building and the neighboring buildings now destroyed or deteriorated beyond rehabilitation, housed what was once claimed to be the largest pea canning factory in the world. It was built, owned and operated by prominent Longmont pioneers. During the 90 some years the cannery operated, it provided a significant market for area farms and employment for many area residents.

The building was constructed by owner John Howard Empson, of the Empson Packing Company. Empson started the Empson Packing Company in 1887 with the object of packing in tin cans vegetables produced on Longmont area farms. Empson came to Colorado from Cincinnati, Ohio in 1880 with his young daughter, Lida, because of poor health. He opened a candy store in Denver in 1883, but continuing in poor health led to his spending a year near Estes Park, reportedly spending much time with Rocky Mountain National Park pioneer Enos Mills. With his health restored, he came to Longmont to build the first cannery structure. Fire destroyed the first cannery in 1891, but it was rebuilt and expanded over the years. Empson built canning factories similar to the Longmont plant in Greeley, Loveland and Ft. Lupton. Vegetable and fruit receiving stations were located in Berthoud, Johnstown, Ault, Hygiene, and Mead.

John Empson was prominent in many areas of Longmont's early life. He was a master at public relations and gained wide attention to himself and Longmont through various schemes including patent confrontations, transcontinental exhibition tours of a giant silver kettle used in the canning process and by donating pumpkins for Longmont's early "Pumpkin Pie Day" celebrations.

In 1920, the Empson Packing Company was sold to a group of prominent Longmonters. Mr. Empson stated, "It is the largest business deal ever made in northern Colorado. It is the transfer of controlling interest in a business having a value of approximately one million dollars." The purchasing group in turn sold stock to local business persons and farmers.

In 1960, controlling interest of Kuner-Empson Company was purchased by out-of-state interests (the Stokelys of Stokely-VanCamp) and the days of the cannery as part of Longmont's business and community life were numbered. The canning business was finally closed down in 1970, primarily because of obsolete equipment and an open sewer system that violated pollution standards.

Today, the building is a successful apartment complex and is an excellent example of the reuse and rehabilitation of a historic structure.