Visit the City of Longmont Flickr flood page to view nearly 1,500 photos that were captured during and after the flood of September 2013. 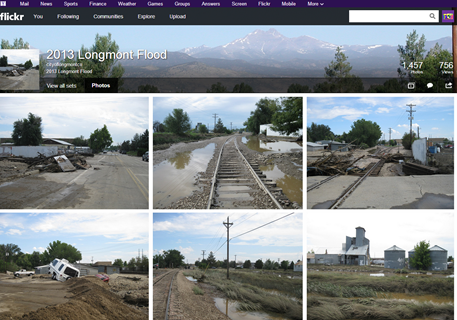 Flood Damage Overview
A 20-minute video produced by the City of Longmont and the Longmont Channel that highlights the damage caused by the September flood is available online. Footage captured in September 2013.

Longmont Gets Flood Help From Littleton Water Rescue
This 15-minute video tells the story a Longmont neighborhood trapped by the 2013 flood waters, through the words and photographs of a survivor and his rescuers. Littleton Fire Rescue's Water Rescue Team used its specialized skills to assist Longmont Fire Department during this epic natural disaster.


Longmont Strong: An Inside Look at the Flood from City Employees
Longmont employees were put to the test with the September 2013 flood, and the response was overwhelming. Many put their own lives at risk to help others. Demonstrating bravery, teamwork, selflessness and compassion, the people of Longmont survived the flood with no loss of life.

Impacts to Button Rock Preserve, Ralph Price and Longmont Reservoirs
A 15-minute video provides a first-hand look at the damage caused by the flood as Public Works and Natural Resources Director, Dale Rademacher, leads a tour through the area.

Flood Damage Assessment Provided at City Council Meeting, 09-24-2013
A 15-minute video in which City Manager, Harold Dominguez gives an overview of infrastructure damage in the city. He also describes the process for working with FEMA and other agencies in the coming weeks and months.

Flood Recovery & Protection: Take a Virtual Tour of Two Projects, 12-17-2014
Watch as project managers explain the significance of these projects in Longmont's flood recovery as well as future flood protection.

Watch as the project manager gives an overview of what this repair work entailed and how it will benefit Longmont in the future.

Watch as staff lead a tour of all the projects completed in Button Rock Preserve to repair damage caused during the 2013 flood.

The Heron Lake Relief Channel is a flood mitigation project intended to protect neighborhoods on the west side of Longmont that suffered damage in the 2013 Flood. The project is the result of a partnership among the City of Longmont, Boulder County, and the Golden Land Company, and it is an example of the region’s commitment to furthering resiliency along St. Vrain Creek.

Learn more about floods, including how to be prepared for future events >