March 10, 2020: A temporary road detour along County Line Road north of 9th Avenue is planned to last approximately 6 months to September 2020. This detour will allow for box culvert work on the Spring Gulch #2 Drainage and Trail Improvement project. Weather conditions have pushed paving and striping work to later in the week. Currently, the detour is anticipated to become active on Thursday, March 12.

In April, work is expected to begin on the County Line Road Improvements project. These two projects will coordinate as much as possible to reduce the impact on travelers and nearby residents. However, alternate routes are recommended during this construction period.

Read a March 6 news release on the project and view traffic and bicycling detour routes. 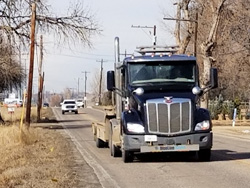 Improvements have been identified by the City of Longmont that are intended to increase both the safety and operation of County Line Road from 9th Avenue to 17th Avenue.

The bike lanes and sidewalk improvements connect to the City's Envision Longmont Multimodal and Comprehensive Plan's principle of "A Complete, Balanced and Connected Transportation System," as well as the Longmont Sustainability Plan's Transportation topic area.

Widened paved shoulders will allow for the addition of on-street bike lanes between 17th Avenue and Spring Gulch #2.

Pedestrian improvements will include trail connections at Jim Hamm Nature Area. Sidewalks will also be installed along the west side of County Line Road from 17th Avenue to Spring Gulch #2.

Left-turn lanes will be installed for the entire length of the project.

The intersection of Sunshine Avenue and County Line Road currently features a right-in/right-out channeling island. This intersection will be improved to allow right-in, right-out and left-in turning, known as a 3/4 intersection.

The intersection of Rustic Drive and County Line Road (which is currently going through the City’s development process) will also receive a 3/4 intersection to allow for right-in, right-out and left-in turning.

Currently, the intersection does not meet the requirements for a traffic signal. Learn more about those requirements in the Frequently Asked Questions > 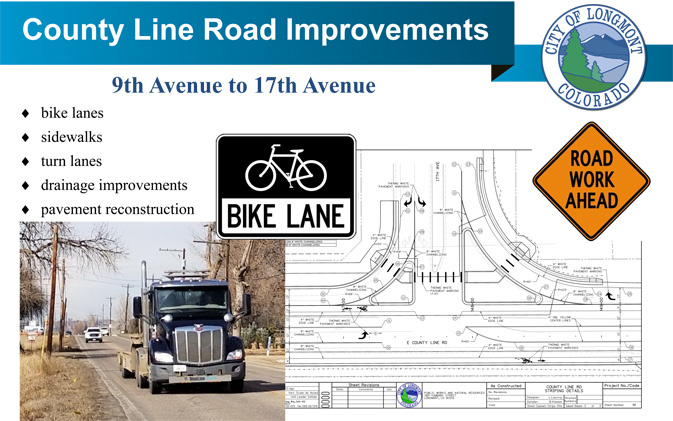 Design work for the improvement project has been completed.

Roadway construction is expected to begin on the County Line Road Improvements project in April 2020. Work on this project will be coordinated with Phase 2 of the Spring Gulch #2 Drainage and Trail Improvement project.

Once construction begins, a phased approach will be used that will allow one lane of traffic to be maintained in each direction during the project. Drivers should anticipate periodic short-term delays, though, for construction vehicles and work in the traffic lane.

An open house to share design plans and answer questions about County Line Road Improvements was held on March 20, 2019. Nearby residents received invitations to the open house, and the event was promoted through the City of Longmont website, calendar and social media accounts. A second public meeting to share information about the project was held on April 25, 2019.

View a list of questions residents raised at the April 25 meeting, along with staff responses >

Neighborhoods and drivers will be informed of road construction activities and conditions through methods such as changeable message signs, construction signs, news releases, and City social media accounts.

Cost for these County Line Road Improvements will be approximately $3 million. Funding will come primarily from the City's 3/4-cent Street Fund Sales and Use Tax.